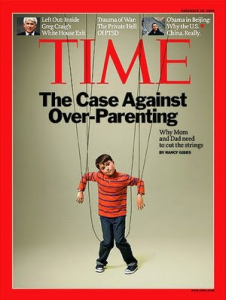 I recently had a couple in my office for a variety of issues. We initially started to dialogue and generate some solutions concerning some significant problems they were facing. Their problem began long before their marriage, as I will explain, but had become an acute issue that was taxing their relationship and marriage as well as their ability to parent their child, a twelve year-old that is quite a handful.

Let me illustrate their battle. They have struggled to parent their daughter due to school struggles and their child’s acting out at home. It’s additionally been a challenge to stay on the same page as parents as well. The problems escalated to epic proportions once they started dealing with a ‘helping grandparent’. The grandmother, whom I’ll call Mary, recently informed her daughter and her son-in-law that she is moving into town. She stated she wanted to be closer to love her granddaughter wanted to be a ‘help’. This is where the trouble and emotional gridlock began.

Mary, the grandmother, is over one afternoon at her daughter’s home and was in the living room with the son-in-law and her daughter. It was after 9pm and the son-in-law didn’t want his daughter to have any soda pop before bed considering the late hour, so he kindly yet firmly told his daughter that she’d have to put the Coke away that she now had in her hand preparing to drink. The daughter put the Coke back in the refrigerator and Grandmother Mary interjects, “Oh, come on a little soda won’t hurt.” The child went to bed and the son-in-law and his mother-in-law engaged in a huge argument about the soda, while the child went up stairs hearing her father trumped by her grandmother. The issue here is not the small comment or the Coke. The real issue is the grandmother’s lack of knowledge of emotional space, her role, and her sense of entitlement in injecting her comments in to the situation.

Here are the issues:

Often helicopter grandparents hide behind the banner of helping but in fact are attempting to meet some need they have. They often didn’t trust their own children when they were young, and now replicate the same pattern with their adult children. They don’t trust and at times see themselves as the better parent and thus inject themselves into their grandchildren’s lives at the undermining of the grandchild’s parent. They also are lonely and attempt to fill their time. Helicopter grandparents are unique in that they often have many emotionally unmet needs. Often these grandparents have weak marriages, they are not happy or really fulfilled deeply, and have a lack of hobbies and passions. These marriages can in fact be quite stable yet are shallow in terms of emotional depth. These grandparent marriages are not necessarily complicated or conflictual, in fact they are quite stable but are often riddled with emotional distance in their own marriage that they mask and bury with a hyper-focus on grandchildren and enmeshment/hovering with their adult grown children.

The Hidden Issues These Grandparents Hide

Helicopter parenting is often a sign of a larger more hidden issue. Grandparents who have an inclination or tendency to be controllers, and who are enmeshed with their adult children are much more likely to engage in hovering with grandchildren. Grandparents that are struggling with their own sense of identity or marriage relationship often end up focusing on grandchildren to keep themselves from dealing with their primary relationship, that of their marriage. Often when couples age and approach retirement they enter into retirement panic. This panic is a state of fear and struggle as they are often not able to identify with their own primary relationship and thus end up hovering over their adult children and then their grandchildren. Often helicopter grandparents are aware of their behavior but don’t know what to do due to their panic. They often are afraid and worried and feel the only solution and path they can follow is to hover. Often they only come to realize their supposed helping is in fact irritating ‘hovering’ when they receive “push back” from their adult grown children who begin to push them back as a signal for them to stop hovering and give them some space.

Are you dealing with a helicopter grandparent?

– Do they call or text you daily or several times a week or would they if you let them?

– Are they approaching retirement and/or are they retired but lacking hobbies, a healthy marriage, or sense of direction?

– Do they subtly push or bully you for time with you and your children to help meet their emotional needs? or do they push you after you say no?

– Are they emotionally needy or do they find it difficult to find their own tasks or pursuits?

– Do you find they are unaware of boundaries and often intrude and engage without respect to your space or role?

– Are you challenged or pushed for explanations or reasons as to how you parent by the grandparent?

– Do you find after you decline an invitation to an event they continue to push you despite that you have already stated you are not coming?

So what can you do?

1. The first thing you can do in dealing with a helicopter grandparent is to educate yourself. Many grandparents (your parents) are not aware of boundaries, invisible lines that divide us from others. You can read my article on boundaries (click here) and get a solid sense of where you end and others begin. This will be a significant help to helping you clarify that the grandparents are NOT the parents but simply guests and advocates and supporters for you. If grandparents really love and want to support their grandchildren they will support and respect you as the parent. Additionally you may want to have them read this article. You may also want to read about codependency and micromanagement the fuel that drives helicopter grandparents hovering, article link here.

2. Begin assertively drawing lines with the helicopter grandparent. Let them know that you do not appreciate the hovering, give them specific examples of things that do not work for you and that are complicating for your immediate family. Validate you are aware they are trying to help and let them know what they need to stop doing and what they can start doing.

3. Hold the lines you have drawn by giving feedback to the helicopter grandparent when they begin hovering. These grandparents struggle to change as they often justify and hide behind of a banner of ‘I-am-just-helping” or compare you to their other children or guilt induce with statements like, “Don’t you want us involved in your children’s’ lives?”. Tell them directly about the space you need and expect them to change their behavior. Continue to give them feedback when and as often as it is needed.

4. If the situation is extreme and they are not responding to your feedback, you may have to moderate the grandparent contact to keep the hovering to a minimum and help provide space to keep the balance of the family. You are likely to experience significant resistance from the grandparent when you say ‘no’ or pass along the feedback, keep in mind this is normal. If you get resistance or silent treatment from them following saying no or drawing a line, then you’ve likely been saying ‘yes’ for too long. These kinds of grandparents will struggle as they are unhealthy but in time will come to understand what works for you. They may try and alter your course by comparing you to others siblings etc., just remind they you are not and will not be a codependent like them and that you will be making your own decisions and it’d be prudent if they would respect them.

The bottom line? Helicopter grandparenting is an approach fraught with problems and patterns that complicate in-law relationships and undermine parenting by the child’s parents. Unique families all contain unique and at times complicated histories. You may also want to consider scheduling a session to visit with me. As a licensed therapist, I can help you sort out the chaos and frustration and help you begin making decisions based on solid principles that can help you deal with a helicopter grandparent.

Phone Consultations – I offer phone consultations with individuals throughout the country that are struggling to deal with a parent or grandparent that is codependent and hovering. If you’re struggling with a parent or grandparent that is getting in your way of finding happiness and peace I can help you. I can assist you in finding guidance and answers specific to your situation. Please contact me by phone 435.574.9193 or email justin.stum.lmft@gmail.com if you’ve any questions about a phone consultation or to review my qualifications. I look forward to meeting you!

Additional links on helicopter parenting (articles written after mine was published)

Copyright: No part of this article in section or full may be reproduced without permission from the author Justin Stum, MS LMFT. The one and only exception is for educational purposes and only if the contact information below for the author is fully cited here in article. Justin Stum, MS LMFT, 640 E 700 S, Suite 103, St. George Utah 84770, 435-574-9193 https://www.justinstum.com